The singing of Ian Curtis also inspires others. For you, we have some famous Ian Curtis quotes. By reading his quotes, you might begin seeing the world from a different point of view.

Ian Curtis Quotes That Will Inspire You

1.”Reality is only a term, based on values and well worn principles, whereas the dream goes on forever.” -Ian Curtis

2.”Existence is.. well.. what does it matter? I exist on the best terms I can. The past is now part of my future. The present is well out of hand.”  -Ian Curtis

3.”I struggle between what I know is right in my own mind, and some warped truthfulness as seen through other people’s eyes who have no heart, and can’t see the difference anyway.”-Ian Curtis 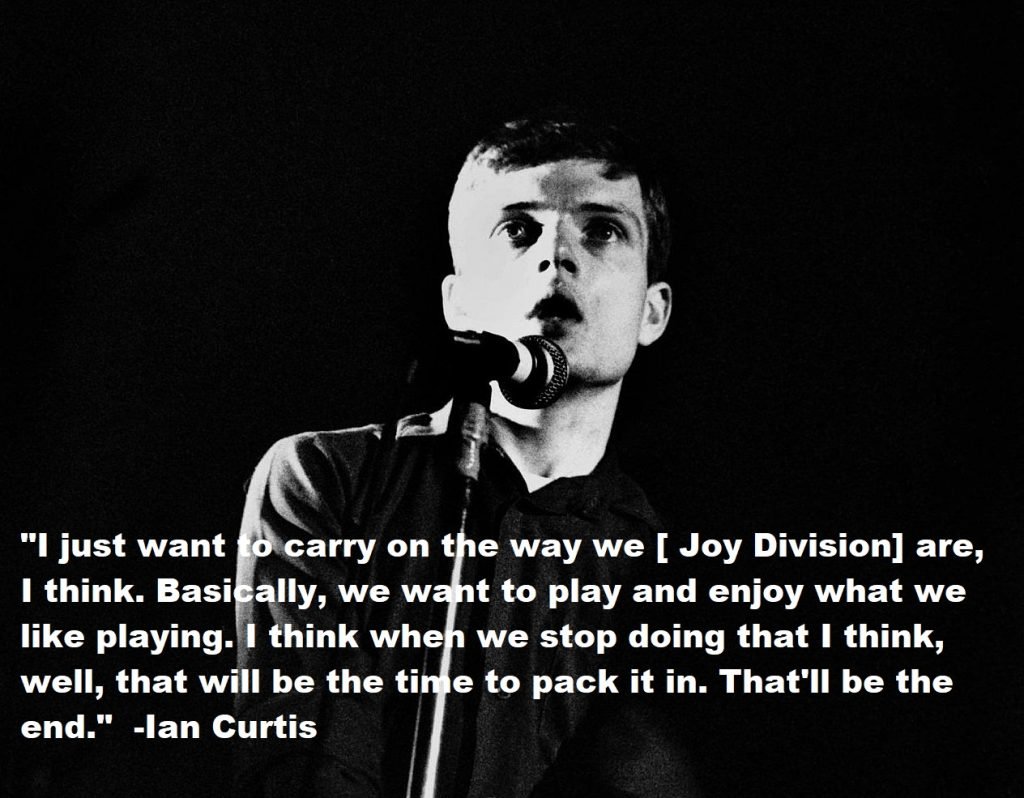 7.”Pictures all around, of how good a life should be, a model for the rest, that bred insecurity, I walked a jagged line and then came back for more, it’s always in my mind, an institution with no law.” -Ian Curtis

8.”I used to work in a factory and I was really happy because I could daydream all day.” -Ian Curtis

9.”All my lyrics are open to interpretation by the individual and imply many different meanings, therefore their relevance is purely subjective.”  -Ian Curtis

10.”Well, subconsciously I suppose some things must stick but I’m not influenced consciously by them.”-Ian Curtis

11.”You cry out in your sleep – all my failings expose.”-Ian Curtis

12.”There’s a taste in my mouth, as desperation takes hold.”-Ian Curtis

13.”Just that something so good just can’t function no more.”-Ian Curtis

14.”When love, love will tear us apart again.” -Ian Curtis

15.”We play the music we want to play and we play the places we want to play. I’d hate to be on the usual record company where you get an album out and you do a tour, and you do all the Odeon’s and all the this that and the others. I couldn’t just do that at all.”   -Ian Curtis

17.”I know someone who works in a record shop where I live and I’ll go in there and he’ll play me “Have you heard this single?”. Singles by, er the group called The Tights, so an obscure thing… and a group called, I think, er Bauhaus, a London group. That’s one single. There’s no one I completely like that I can say “Well I’ve got all this person’s records. I think he’s great” or “This group’s records” it’s just, again, odd things.”  -Ian Curtis

18.”I like the groups on Factory, A Certain Ratio and Section 25.I”-Ian Curtis

19.”I tend not to listen. When I’m listening to records, I don’t listen to much new wave stuff, I tend to listen to the stuff I used to listen to a few years back but sort of odd singles.” -Ian Curtis 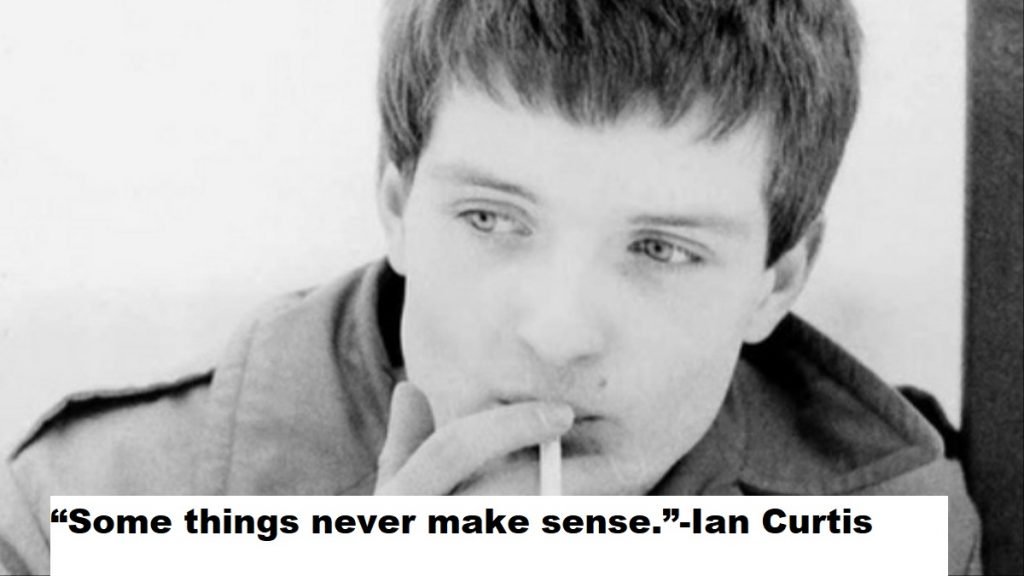 22.”They [ Factory Records] are always looking for the next group, the next big thing, to bring the record sales in and for them to promote and everything, but Factory just sign who they want to, put records by who they want to out, package it how they want to, how they like doing it. It’s just run like that.”-Ian Curtis

23.“You’re always working to the next song. No matter how many songs you’ve done, you’re always looking for the next one.”-Ian Curtis

24.“This is the hour when the mysteries emerge, a strangeness so hard to reflect.”-Ian Curtis

25.“I don’t write about anything in particular, I write very subconsciously.”-Ian Curtis

28.“I leave it open to interpretation.”-Ian Curtis

29.“Everyone’s living in their own little world.”-Ian Curtis

30.“Excessive flashpoints, beyond all reach.”-Ian Curtis

31.“How can I find the right way to control all the conflict inside?”-Ian Curtis

32.“Is this the role that you wanted to live?”-Ian Curtis

34.“We resist all of times mutations.”-Ian Curtis 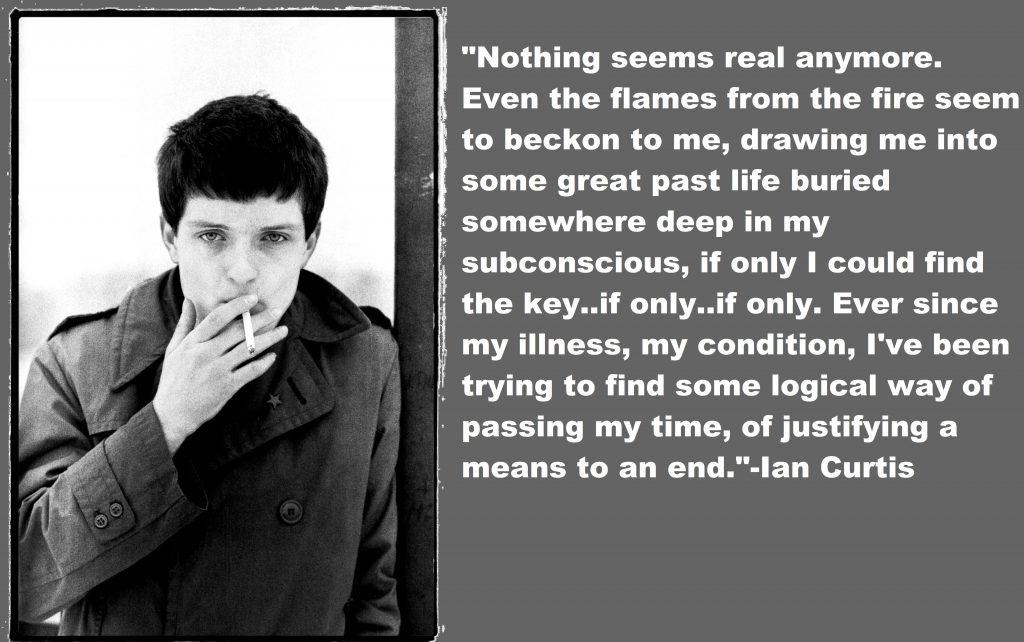 36.“Everyone calls us Nazis.”-Ian Curtis

37.“I can now see everything falling to pieces before my eyes.”-Ian Curtis

38.”The things that we’ve learned are no longer enough.”-Ian Curtis

Decide for me, please let me know

Pictures all around, of how a good life should be

A model for the rest, that bred insecurity

Everything seemed easy but I didn’t have the heart

Me in my own world, yeah you there beside

The gaps are enormous, we stare from each side”-Ian Curtis

Why must we all grow up when we could just play and play?”-Ian Curtis

Only one thing wrong with that, what it don’t buy I don’t use “-Ian Curtis

A change of scene, with no regrets,

A chance to watch, admire the distance,

Still occupied, though you forget.”-Ian Curtis

Over each mistakes were made.

I took the blame.”-Ian Curtis

It’s what we’ve been shown,

We’re living by your rules”-Ian Curtis

Heaven knows, it’s got to be this time.”-Ian Curtis 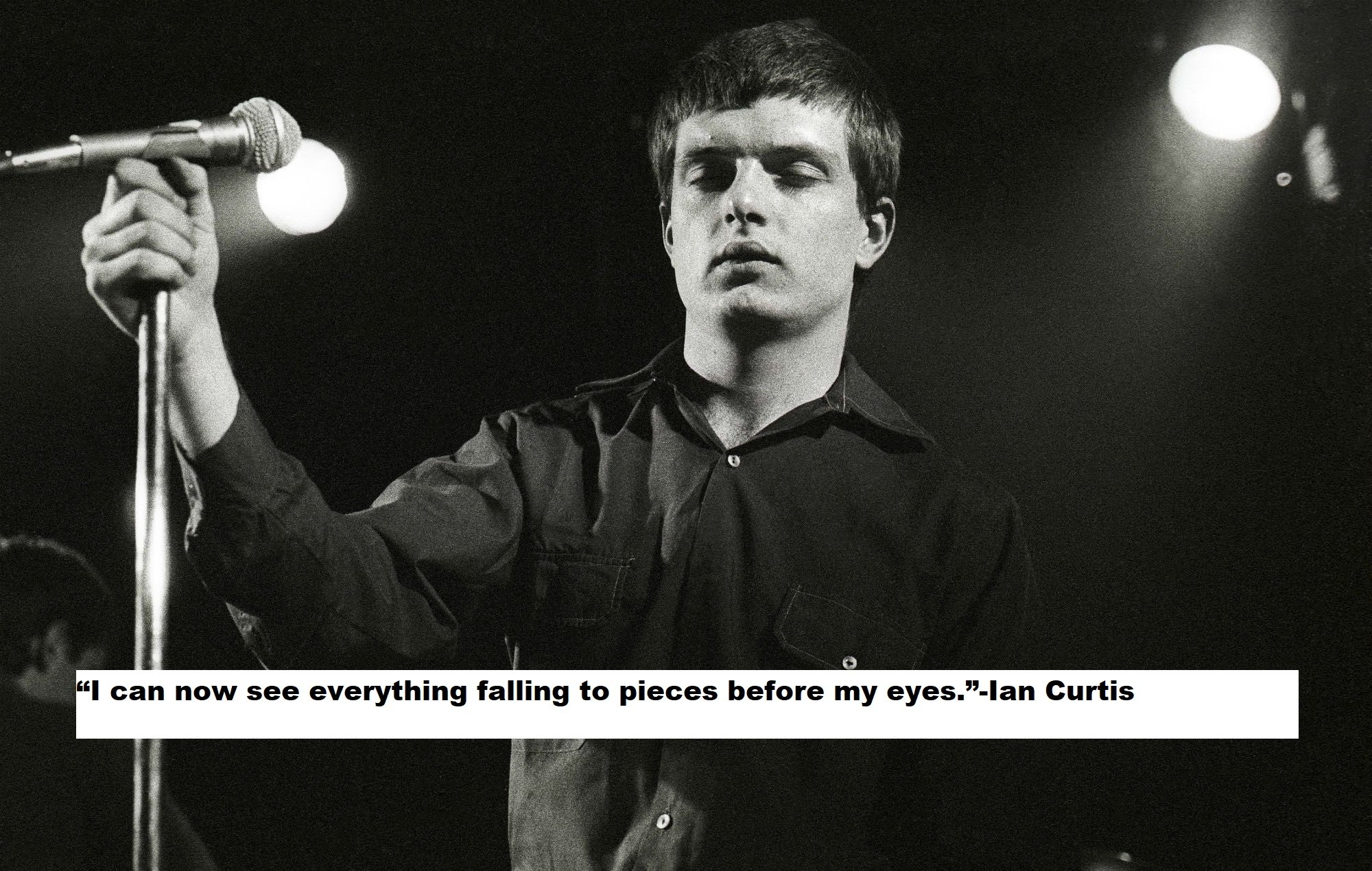 The Joy Division band became dissolved because Ian Curtis was the main singer in this band. Curtis had a very short career, but he had a great influence on others. His singing had a powerful impact on people.

“Watching her, these things she said,

The times she cried,

Too frail to wake this time.”-Ian Curtis

“Watching her, these things she said,

The times she cried,

Too frail to wake this time.”

Different famous singers were influenced by the singing of Ian Curtis and with his style. They liked the singing and dancing style of Curtis. Ian Curtis was not only a singer but also was a complete artist and a full entertainer. Do share these Ian Curtis quotes with your friends.

51 Most Popular Tibetan Proverbs So Far