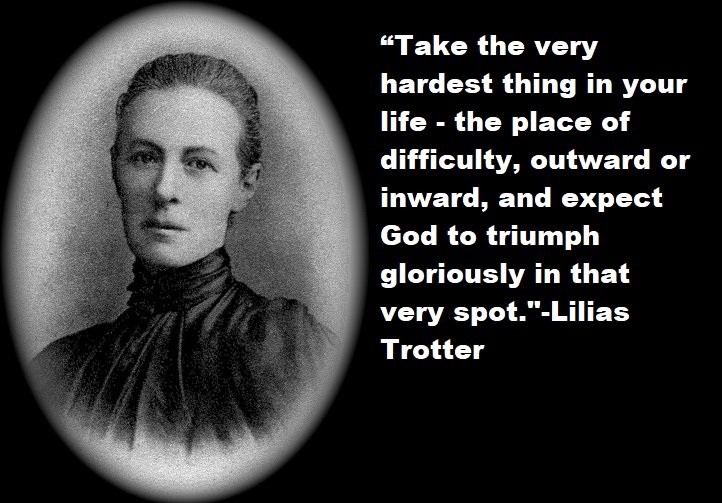 Both parents of Lilias Trotter were inclined to humanitarianism. Alexander does the second marriage with Isabella after the death of his first wife. In the twenties, Lilias Trotter was greatly influenced by the Higher Life Movement.

After this, Lilias joined the volunteer force. She was a self-taught artist. The mother of Lilias knows about her talent. In 1876 her mother sent the drawings of Lilias Trotter to an art critic. John Ruskin, who was a social philosopher, also sees the drawings of Trotter.

2.” Just there He can bring your soul into blossom.”-Lilias Trotter

3.“Life is grandly simple when we reach that point.”-Lilias Trotter

4.” When the spirit of calculating results and consequences has been left behind.”-Lilias Trotter

5.” When God himself, and no mere experience, is our exceeding great reward.”-Lilias Trotter

6.“The first step into the realm of giving is… not manward but Godward: an utter yielding our best.”-Lilias Trotter

7.” So long as our idea of surrender is limited to the renouncing of unlawful things, we have never grasped its true meaning: that is not worthy of the name for ‘no polluted thing’ can be offered.”-Lilias Trotter

8.“For if the Sun of Righteousness has risen upon our hearts, there is an ocean of grace and love and power lying all around us, an ocean to which all earthly light is but a drop, and it is ready to transfigure us, as the sunshine transfigured the dandelion, and on the same condition – that we stand full face to God.” -Lilias Trotter

9.“Believe in the darkness what you have seen in the light.” -Lilias Trotter

10.“It is water poured down into a low narrow channel that can rise into a fountain. Faith that come from the depths has a spring in it!”-Lilias Trotter

12.“I am seeing more and more that we begin to learn what it is to walk by faith when we learn to spread out all that is against us: all our physical weakness, loss of mental power, spiritual inability – all that is against us inwardly and outwardly – as sails to the wind and expect them to be vehicles for the power of Christ to rest upon us. It is so simple and self evident – but so long in the learning!” -Lilias Trotter

14.“Faith is the link which joins our uttermost weakness to God’s almighty strength.” I came on that the other day, and it is so true, Faith that comes from the depths has a spring it it, like the water pressed down into a low narrow channel that can rise into a fountain.”-Lilias Trotter

15.“We felt that we must get our bit of quiet in the garden today, for soul as well as body. He makes the scraps of aloneness very very precious – and though there is no possibility of having a key or of ensuring the quiet lasting for a moment, one gets a sense among the palms and fruit blossoms that one has so far as possible shut the door. And it is true as of old that ‘the doors being shut, came Jesus.’” -Lilias Trotter

16.“Oh, the desert is lovely in its restfulness. The great brooding stillness over and through everything is so full of God. One does not wonder that He used to take His people out into the wilderness to teach them.” -Lilias Trotter

17.“The place where we wash His Feet with our tears has a great nearness to His Holy Place above.”-Lilias Trotter

18.“More and more one sees that prayer is a quiet time for thinking out God’s thoughts with Him and giving our “Amen” in the Name of Jesus. Was it not Galileo, when the light of some great astronomical law broke on him – or was it Newton? – who fell on his knees and said, ‘I praise Thee O God that Thou has let me think a thought that Thou has been thinking.’”-Lilias Trotter

19.“Turn full your soul’s vision to Jesus, and look and look at Him, and a strange dimness will come over all that is apart from Him, and the Divine ‘attrait’ by which God’s saints are made. . . will lay hold of you. For ‘He is worthy’ to have all there is to be had in the heart that He has died to win.”-Lilias Trotter

21.“There is a great sense of rest in being in the way of His steps.” -Lilias Trotter

22.“The milky-looking glacier torrent spoke with God’s voice this morning – so obedient to its course in its narrow bed, yet just tossing with freedom and swing in every motion. Such a picture of the ‘rivers of living water’ – bound and yet unbound.” -Lilias Trotter

24“A flower that stops short at its flowering misses its purpose. We were created for more than our own spiritual development; reproduction, not mere development is the goal of matured being – reproduction in other lives.” -Lilias Trotter

25.“Holiness, not safety, is the end of our calling.” -Lilias Trotter

26.“Are our hands off the very blossom of our life? Are all things – even the treasure that He has sanctified – held loosely, ready to be parted with, without a struggle, when He asks for them?” -Lilias Trotter

27.“And a like independence is the characteristic of the new flood of resurrection life that comes to our souls as we learn this fresh lesson of dying – a grand independence of any earthly thing to satisfy or soul. The liberty of those who have nothing to lose because they have nothing to keep. We can do without anything while we have God.” -Lilias Trotter

28.“I am beginning to see that it is out of a low place that one can best believe.”-Lilias Trotter

29.“The same lesson is reiterated all round by God: the simple ABC lesson that inadequacy and inefficiency on the human side are His conditions for working. ‘He sealeth up the hand of every man, that all men may know His work.”-Lilias Trotter

30.”The clouds are the dust of His Feet.’ The beauty of that old line of Hebrew poetry came afresh today. The thickest of the cloud storm would be just where He is passing. We see the dust now. We shall see His Footprints when He has passed along the way.”-Lilias Trotter

31.“Take the very hardest thing in your life – the place of difficulty, outward or inward, and expect God to triumph gloriously in that very spot. Just there He can bring your soul into blossom!” -Lilias Trotter

32.“All the more beautiful will be God’s triumph when it comes. The highest music is not the music where all goes on simple and straight and sweet, but where discord suddenly resolves tensions with harmony.” -Lilias Trotter

33.“We love to see the impossible done. And so does God.” -Lilias Trotter

34.“Yes: face it out to the end: cast away every shadow of hope on the human side as a positive hindrance to the Divine; heap the difficulties together recklessly, and pile on as many more as you can find: you cannot get beyond that blessed climax of impossibility. Let faith swing out on Him. He is the God of the impossible.” -Lilias Trotter 36.“’God loves with a great love the men whose heart is bursting with a passion for the impossible.’ Oh to learn how to fight through the battle in the heavenly places till the day comes. To attempt the impossible and expect the impossible it comes back to that again.” -Lilias Trotter

37.“We have such faith that it is God’s way, just because it is so unlike ours!” -Lilias Trotter

38.“May He gather all the fragments of the Spirit’s working into His eternal purposes and keep them there.” -Lilias Trotter

39.“He is not bound to reproduce. He is the Creator: have we ever let our hearts and hopes go out to the glory of that Name? Look at the tiny measure of creative power given to man, in music, poetry, art – where there is a spark of it, how it refuses to be fettered by repeating itself. The history of His wonders in the past is a constant succession of new things, and He is not at the end of His resources yet.” -Lilias Trotter

40.“For the world’s salvation was not wrought out by the three years in which He went about doing good, but in the three hours of darkness in which He hung, stripped and nailed, in uttermost exhaustion of spirit – soul and body – till His heart broke. So little wonder for us, if the price of power is weakness.”-Lilias Trotter

41.“Such a day of small things still, but on God’s terms, and that is enough. Size as well as time and space count nothing with Him.” -Lilias Trotter

42.“These crystals have a word for us too, for each of them sprang out of some atom of a growing point round which clustered crystallized this endless beauty of form. If we may but be a crystallizing point from which God can work, it matters nothing, how insignificant that starting point.” -Lilias Trotter

43.“How childish it must seem to them, up in heaven, when we treasure the importance of a thing by its size. ‘“Fulfilling His word’ ‘The meeting of His wishes’ – that is all that matters.” -Lilias Trotter

44.“We are proving these days that time is nothing to God: nothing in its speeding nothing in its halting. He is the God that ‘inhabiteth eternity.’” -Lilias Trotter

45.“I am full of hope that when God delays in fulfilling our little thoughts, it is to leave Himself room to work out His great ones.”-Lilias Trotter

46.“We have to do with One who “inhabiteth eternity” and works in its infinite leisure.” -Lilias Trotter

47.“God only knows the endless possibilities that lie folded in each one of us!” -Lilias Trotter

48.“All little miniature beginnings but all ‘beautiful in their time’, like the dark green August oranges in the court below. The fact that they have got thus far into being is more than a promise. Like all the promises of God they are (given the conditions) an accomplishment begun. His ‘Yea’ only waits our ‘Amen.’”-Lilias Trotter

49.“In all the outward withholdings of this year, God, as is His wont, has been “opening” a door where He closes a window.” -Lilias Trotter

50.“We ourselves are ‘saved to save’ – we are made to give – to let everything go if only we may have more to give. The pebble takes in all the rays of light that fall on it, but the diamond flashes them out again: every little facet is a means, not simply of drinking more, but of giving more out.” -Lilias Trotter Take it and then have the belief in God. Then see how God helps you in every difficulty. In every spot, God will show you the right path. Lilias Trotter does a lot of hard work in her life.

She has a strong belief in God. By reading the quotes of Lilias Trotter, you might get inspiration in life. You have the motivation to choose the right path and just believe in God.