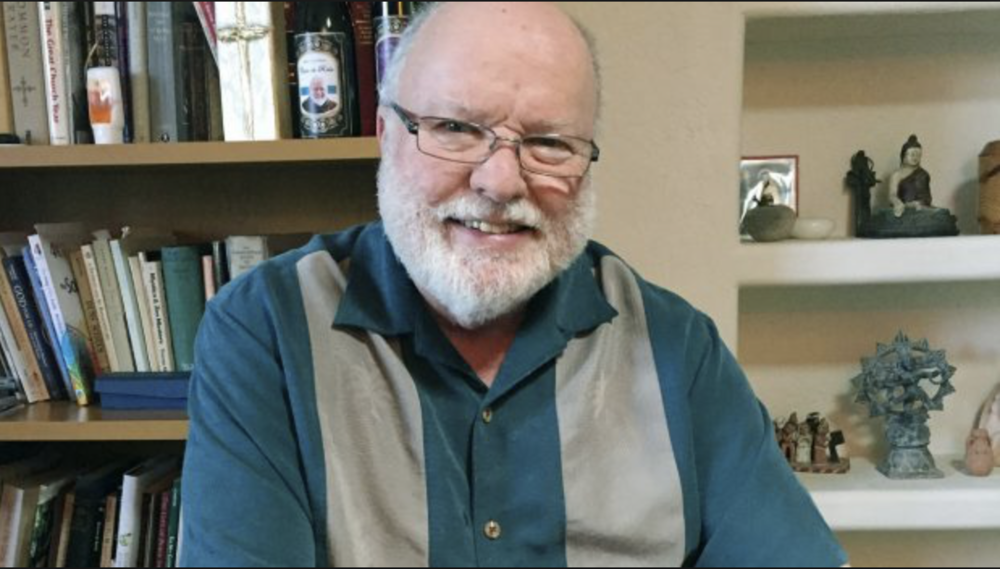 Richard Rohr Quotes – Richard Rohr was born in Kansas. In 1970 Richard got his degree of masters. He does his master’s from the University of Dayton. Richard Rohr is an inspirational speaker.

Due to his inspirational talks, he has got recognition internationally. Rohr has also published several books. There is an extensive list of books by Richard Rohr, which are very famous.

Some of these books include Immortal Diamonds, A spirituality for the two halves of life, The Naked Now, and much more. Numerous recorded talks of Rohr were also published. His books and talks inspire others in different fields of life.

Richard Rohr’s quotes have a powerful impact on others. For you, we have some well-known Richard Rohr quotes. These quotes might inspire and motivate you in your life. By reading these quotes, you will begin to observe this world from a different perspective. 2.”It is so important to balance orthodoxy with orthopraxy.”-Richard Rohr

3.”The theological virtue of hope is the patient and trustful willingness to live without closure, without resolution, and still be content and even happy because our Satisfaction is now at another level, and our Source is beyond ourselves.”-Richard Rohr

4.”One wonders how far spiritual and political leaders can genuinely lead us without some degree of mystical seeing and action.”-Richard Rohr

5.”This earth indeed is the very Body of God, and it is from this body that we are born, live, suffer, and resurrect to eternal life. Either all is God’s Great Project, or we may rightly wonder whether anything is God’s Great Project. One wonders if we humans will be the last to accept this.”-Richard Rohr

6.”Without transformation, you can assume you’re at a high moral, spiritual level just because you call yourself Lutheran or Methodist or Catholic. I think my great disappointment as a priest has been to see how little actual spiritual curiosity there is in so many people.”-Richard Rohr

7.”Most of the Catholics Christians I’ve met would for all practical purposes believe Jesus is God only, and we are human only. We missed the big point. The point is the integration, both in Jesus and ourselves.”-Richard Rohr

9.”The true mystic is always both humble and compassionate, for she knows that she does not know.”-Richard Rohr

10.”Most Christian ‘believers’ tend to echo the cultural prejudices and worldviews of the dominant group in their country, with only a minority revealing any real transformation of attitudes or consciousness. It has been true of slavery and racism, classism and consumerism and issues of immigration and health care for the poor.”-Richard Rohr

11.”Your heart has to be prepared ahead of time through faith and prayer and grace and mercy and love and forgiveness so you can keep your heart open in hell, when hell happens.”-Richard Rohr

12.”I see little difference in the attitudes of those who consider themselves Christian and those who are openly secular and agnostic. Most Christian citizenship appears to be clearly right here – on this little bit of very unreal estate.”-Richard Rohr

13.”Jesus is much more concerned about shaking your foundations, giving you an utterly alternative self image, world image, and God image, and thus reframing your entire reality. Mere inspiration can never do this.”-Richard Rohr

14.”When ‘happiness’ eludes us – as, eventually, it always will – we have the invitation to examine our programmed responses and to exercise our power to choose again.”-Richard Rohr

15.”Most women prefer circles of sharing to pyramids and hierarchies. They prefer conversation to construction. They will usually choose nurturance and empathy over competition and climbing. They will normally choose connection over simple performance games.”-Richard Rohr

16.”This life journey has led me to love mystery and not feel the need to change it or make it un-mysterious. This has put me at odds with many other believers I know who seem to need explanations for everything.”-Richard Rohr

17.”One would think that people who insist on being monotheistic would be the first in line to walk across the artificial boundaries created by nation states, class systems, cultures and even religions. But often they are the last!”-Richard Rohr

18.”In my opinion, most organized religion does neither agentic service nor relational nurturance very well.”-Richard Rohr 21.”Having a school really is the fulfillment of a longtime dream of mine.”-Richard Rohr

22.”We Catholics must admit that there is a constant temptation among us to avoid the lectionary and the Word of God for private and pious devotions that usually have little power to actually change us or call our ego assumptions into question.”-Richard Rohr

23.”Nature is the one song of praise that never stops singing.”-Richard Rohr

24.”I decided years ago that if I’m going to keep teaching contemplation, then the last years of my life should be contemplative.”-Richard Rohr

26.”Yes, the natural world is the first and primary Bible. We have not honored it, so how could we, or would we, know how to honor and properly use the second Bible, when it was written.”-Richard Rohr

27.”Ancients knew that you need guidance, patronage and protection as you move from one place or state to another, whenever you cross a bridge. You had better know what you are doing when you leave one group or place to join another.”-Richard Rohr

28.”If our love of God does not directly influence, and even change, how we engage in the issues of our time on this earth, I wonder what good religion is.”-Richard Rohr

29.”People inside of belonging systems are very threatened by those who are not within that group. They are threatened by anyone who has found their citizenship in places they cannot control.”-Richard Rohr

30.”Contemplation is an alternative consciousness that refuses to identify with or feed what are only passing shows. It is the absolute opposite of addiction, consumerism or any egoic consciousness.”-Richard Rohr

31.”It’s important to note that Jesus and Christ are two different faith affirmations. Hardly any Christians have been taught that – they think “Christ” is Jesus’s last name.”-Richard Rohr

32.”The most courageous thing we will ever do is to bear humbly the mystery of our own reality.”-Richard Rohr

33.”Faith does not need to push the river because faith is able to trust that there is a river. The river is flowing. We are in it.”-Richard Rohr

34.”The movement toward gratitude, authenticity, and union is the natural and organic inner work of the second half of our lives.”-Richard Rohr 36.”Notice that whenever we suffer pain, the mind is always quick to identify with the negative aspects of things and replay them over and over again, wounding us deeply. Almost all humans have Obsessive Compulsive Disorder (OCD) of the mind, which is why so many people become fearful, hate-filled, and wrapped around their negative commentaries. This pattern must be recognized early and definitively. Peace of mind is actually an oxymoron. When you’re in your mind, you’re hardly ever at peace, and when you’re at peace, you’re never only in your mind.”-Richard Rohr

37.”Religion was made to order to “save the world,” to use a phrase Christians use so much, but we really haven’t been doing a good job of it for centuries. It’s heartbreaking really.”-Richard Rohr

38.”The people who know God well – the mystics, the hermits, those who risk everything to find God – always meet a lover, not a dictator. God is never found to be an abusive father or a tyrannical mother, but always a lover who is more than we dared hope for. How different than the “account manager” that most people seem to worship. God is a lover who receives and forgives everything.”-Richard Rohr

39.”Pain and suffering that are not transformed are usually projected onto others.”-Richard Rohr

40.”We find it hard to love imperfect things so we imagine God is just as small as we are. If we expect or need things to be perfect or to our liking ( including ourselves) we have created a certain path for a very unhappy life.”-Richard Rohr

41.”Today we need whatever methods or help we can receive to allow the Christian message to take us to a deeper level of transformation.”-Richard Rohr

42.”You surrender to love; you do not accomplish love by willpower.”-Richard Rohr

44.”I have prayed for years for one good humiliation a day, and then, I must watch my reaction to it. I have no other way of spotting both my denied shadow self and my idealized persona.”-Richard Rohr

45.”I have prayed for years for one good humiliation a day, and then, I must watch my reaction to it. I have no other way of spotting both my denied shadow self and my idealized persona.”-Richard Rohr

46.”The Gospel gives our suffering personal and cosmic meaning, by connecting our pain to the pain of others, and finally, by connecting us to the very pain of God.”-Richard Rohr

47.”When you get your,’Who am I?’, question right, all of your,’What should I do?’ questions tend to take care of themselves”-Richard Rohr

48.”As you look back on a year almost ended, recall the ways in which God has been inviting you to return, again and again, to Love which is the same as returning to God”-Richard Rohr

50.”To have an attitude of faith is to hear the Lord speaking everywhere and all the time, in the concrete and ordinary circumstances of our lives. Then religion and life have become one, and we are never far from God. That’s why people of faith never grow old and never grow tired. They don’t need signs and wonders, apparitions and visions. God has quietly broken through and stands perfectly revealed in the now of things.”-Richard Rohr By moving on this right path, everyone can find the inner truth. Everything present inside the person is the responsibility of that person. No one in this world is responsible for the actions of others.

“You create your response to reality, and that response, for all practical purposes, is your reality.”–Richard Rohr

The quotes of Richard Rohr will give you the correct meaning of life. What do you think about these Richard Rohr quotes? Do you like these quotes? If yes, then share them with your friends.