Simon Bolivar helped different countries in taking independence from the Spanish empire. The countries that were under the Spanish Empire were Panama, Bolivia, Ecuador, Colombia, Peru and Venezuela.

This idea of Enlightenment came into the mind of Simon when he was in Europe. His vision motivated him and helped him to defeat the Spanish empire. After this, in 1808, he started the campaign for independence.

The quotes of Simon Bolivar inspired those who want to get freedom in life. For telling you the importance of independence in life, we have compiled some famous Simon Bolivar quotes.

These quotes will motivate you to work hard for your dreams. By reading these quotes, you will see your life from a different perspective. 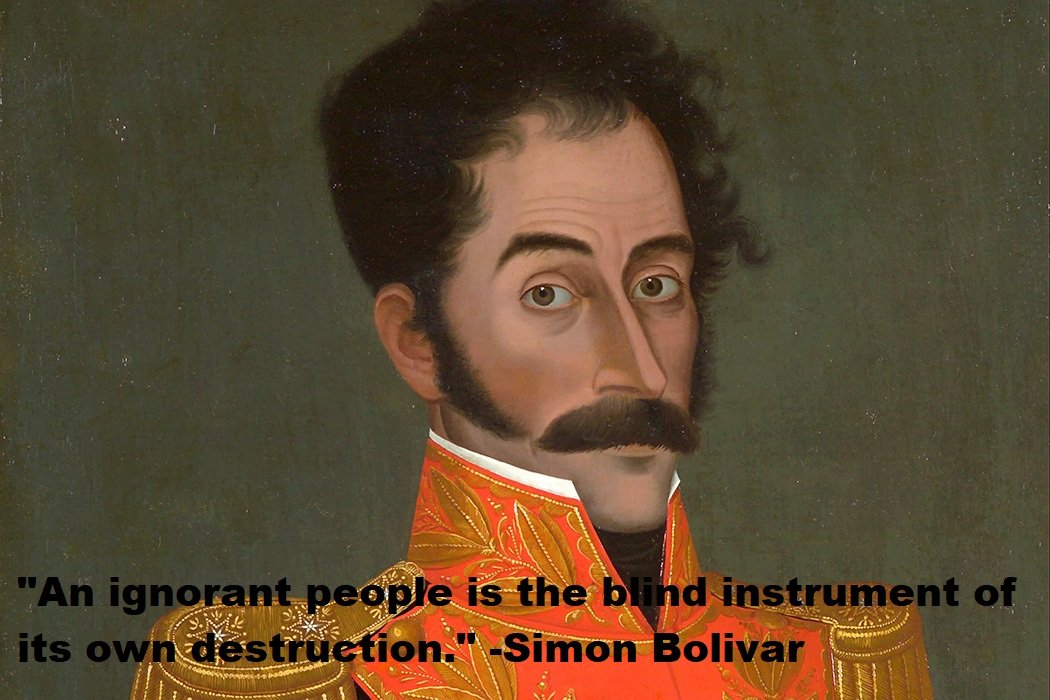 2.”When tyranny becomes law, rebellion is a right.” -Simon Bolivar

3.”A people that loves freedom will in the end be free.” -Simon Bolivar

4.”The art of victory is learned in defeat.”   -Simon Bolivar

6.”Flee the country where a lone man holds all power: It is a nation of slaves.”-Simon Bolivar

7.”To do something right it must be done twice. The first time instructs the second.”-Simon Bolivar

8.”The continuation of authority has frequently proved the undoing of democratic governments. Repeated elections are essential to the system of popular governments, because there is nothing so dangerous as to suffer power to be vested for a long time in one citizen. The people become accustomed to obeying him, and he becomes accustomed to commanding, hence the origin of usurpation and tyranny.”-Simon Bolivar

9.”In the unity of our nations rests the glorious future of our peoples.”-Simon Bolivar

10.”It is harder to maintain the balance of freedom than it is to endure the weight of tyranny.”-Simon Bolivar

11.”The United States appear to be destined by Providence to plague America with misery in the name of liberty.”-Simon Bolivar

12.”Do not compare your material forces with those of the enemy. Spirit cannot be compared with matter. You are human beings, they are beasts. You are free, they are slaves.”-Simon Bolivar

14.”The Ignorance the people live in leads them to commit mistakes against their own happiness.”-Simon Bolivar

15.”The first duty of a government is to give education to the people.”-Simon Bolivar

16.”Colombians! My last wish is for the happiness of the patria. If my death contributes to the end of partisanship and the consolidation of the union, I shall be lowered in peace into my grave.”-Simon Bolivar

17.”A state too expensive in itself, or by virtue of its dependencies, ultimately falls into decay; its free government is transformed into a tyranny; it disregards the principles which it should preserve, and finally degenerates into despotism. The distinguishing characteristic of small republics is stability: the character of large republics is mutability.”-Simon Bolivar

18.”The freedom of the New World is the hope of the Universe.”-Simon Bolivar

19.”If Nature is against us, we shall fight Nature and make it obey.”-Simon Bolivar 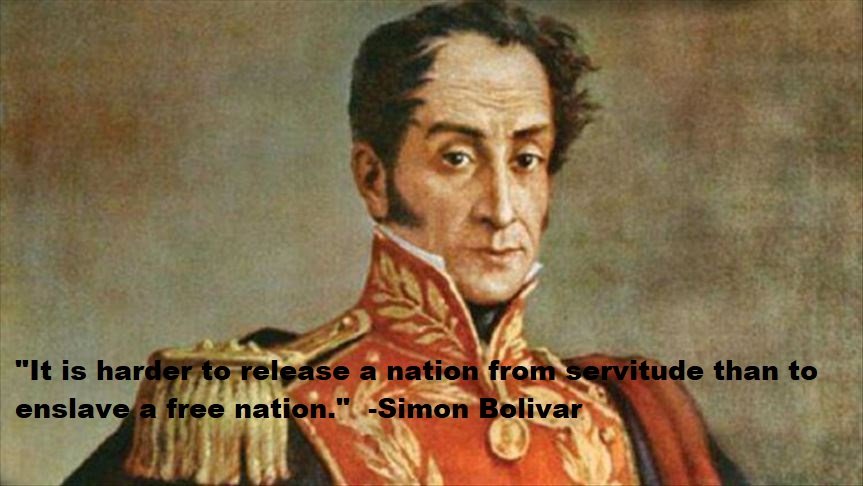 21.”He who serves a revolution ploughs a sea.”-Simon Bolivar

23.”The three greatest fools (majaderos) of history have been Jesus Christ, Don Quixote – and I!”-Simon Bolivar

24.”Morals and lights are our first necessities.”-Simon Bolivar

25.”Damn it, how will I ever get out of this labyrinth?”-Simon Bolivar

26.”Let the entire system of government be strengthened, and let the balance of power be drawn up in such a manner that it will be permanent and incapable of decay because of its own tenuity.”-Simon Bolivar

27.”Republican democracy is overperfect and demands political virtues and talents far superior to our own.”-Simon Bolivar

28.”War lives on despotism and is not waged with God’s love.”-Simon Bolivar

29.”Our hatred knows no bounds, and the war shall be to the death.”-Simon Bolivar

30.”Legislators could certainly do with a school of morals.”-Simon Bolivar

31.”Among the popular and representative systems of government I do not approve of the federal system: it is too perfect; and it requires virtues and political talents much superior to our own.”-Simon Bolivar

32.”Is it conceivable that a newly emancipated people can soar to the heights of liberty, and, unlike Icarus, neither have its wings melt nor fall into an abyss? Such a marvel is inconceivable and without precedent. There is no reasonable probability to bolster our hopes.”-Simon Bolivar

33.”Do not adopt the best system of government, but the one most likely to succeed.”-Simon Bolivar

34.”Slavery is the offspring of darkness.”-Simon Bolivar 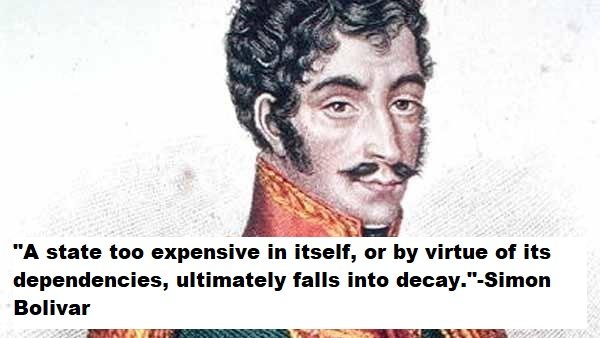 36.”If Nature is opposed, we will fight her and make her obbey us.”-Simon Bolivar

37.”When mankind was in its infancy, steeped in uncertainty, ignorance, and error, was it possible to foresee what system it would adopt for preservation.”-Simon Bolivar

38.”Colombians! Gather around the constitutional congress. It represents the wisdom of the nation, the legitimate hope of the people, and the final point of reunion of the patriots”-Simon Bolivar

39.”The death of my wife placed me early in the road of politics, and caused me to follow the chariot of Mars”-Simon Bolivar

40.”If Miranda believed the Spaniards would observe the treaty, he should have remained to keep them to their word; if he did not, he was a traitor to have sacrificed his army to it”-Simon Bolivar

41.”We have been ruled more by deceit than by force, and we have been degraded more by vice than by superstition”-Simon Bolivar

42.”To do something right it must be done twice. The first time instructs the second”-Simon Bolivar

43.””Should I not let it be known to later generations that Alexander Petion is the true liberator of my country?”-Simon Bolivar

44.”They mistake pure illusion for reality, license for freedom, treason for patriotism, vengeance for justice”-Simon Bolivar

45.”It is harder to maintain the balance of freedom than it is to endure the weight of tyranny”-Simon Bolivar

46.”All who have served the Revolution have ploughed the sea”-Simon Bolivar

47.”A people that loves freedom will in the end be free”-Simon Bolivar

48.”Good morals, and not force are the pillars of the law”-Simon Bolivar 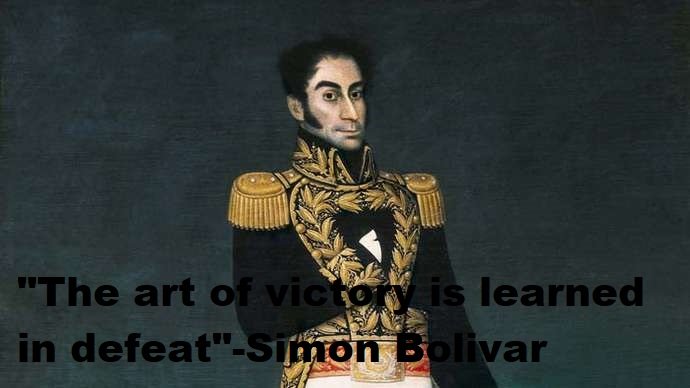 Simon Bolivar also gave importance to education. If any government wants their country to prosper, then the government should focus on education. They should provide education to the people of the country.

“Slavery is the daughter of darkness”-Simon Bolivar

Simon Bolivar knew that if anyone wants to get something in life, they have to deal with life failure. Without failure, no one can learn the real meaning of success or victory.

Even a successful person has to go through a lot of difficulties and problems. Only that person gets success who never gives up in life and always moves forward.

51 Most Popular Tibetan Proverbs So Far