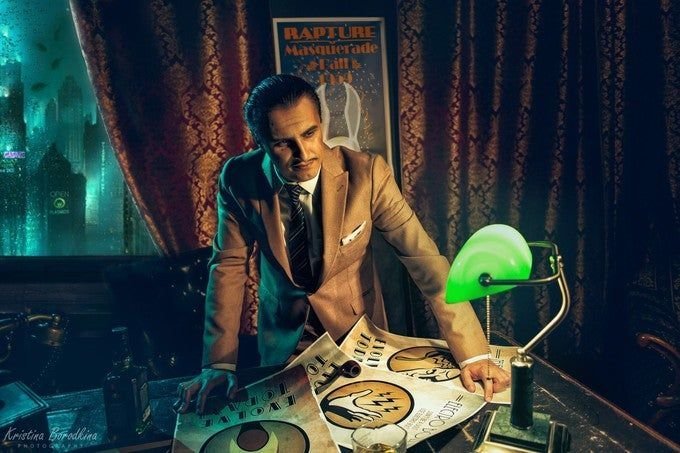 After BioShock 2, the prequel of BioShock with the name of BioShock Infinite: Burial at Sea was also released. In the game, Andrew Ryan was an idealist businessman who seeks to avoid scrutiny from the government.

Andrew Ryan’s dialogues or quotes have a strong impact on his fans. You will learn how to solve different mysteries and find the solution by reading the quotes by Andrew Ryan. Here is a collection of famous Andrew Ryan quotes that might help you a lot in life. 3- “Commerce is the life blood of the City. If we are not careful, the government will become cancer.” – Andrew Ryan

5- “Before the final rat has eaten the last gram of you, Rapture will have returned. I will lead a parade. “Who was that,” they’ll say, as they point to the sad shape hanging on my wall, “who was that?” – Andre Ryan

6- “Whenever anyone wants others to do their work they call upon their Altruism. ‘Never mind your own needs,’ they say, ‘Think of the needs of… of whoever. Of the state. Of the poor. Of the Army, of the King. Of God.’ The list goes on and on. How many catastrophes were launched with the words ‘Think of yourself?’ It’s the king and country crowd who light the torch of destruction.” – Andrew Ryan

7- “In what country is there a place for people like me?” – Andrew Ryan

9- “Altruism is the root of all Wickedness.” – Andrew Ryan

10- “To build a city at the bottom of the sea: insanity. But where else could we be free from the clutching hand of the parasites? Where else could we build an economy that they would not try to control, a society they would not try to destroy? It was not impossible to build Rapture at the bottom of the sea. It was impossible to build it anywhere else.” – Andrew Ryan

11- “What would the Russian Bear and the American Eagle do if they discovered our paradise? Our secrecy is our shield!” – Andrew Ryan

14- “Could I have made mistakes? One does not build cities if one is guided by doubt. But can one govern in absolute certainty? I know that my beliefs have elevated me, just as I know that the things I have rejected would have destroyed me. But the city… it is collapsing before my… have I become so convinced by my own beliefs that I have stopped seeing the truth? Perhaps. But Atlas is out there, and he aims to destroy me, and destroy my city. To question is to surrender. I will not question.” – Andrew Ryan

16- “In the end what separates a man from a slave? Money? Power? No, a man chooses, and a slave obeys!” – Andrew Ryan

17- “With the sweat of your brow. Rap­ture can become your city as well.” – Andrew Ryan 21- “I built a city where the artist would not fear the censor, where the great would not be constrained by the small, where the scientist would not be bound by petty morality. I chose to build Rapture. But my city was betrayed by the weak. So I ask you, if your life was priced would you kill the innocent? Would you sacrifice your humanity? We all make choices but in the end our choices make us.” – Andrew Ryan

23- “Why worship a flag or a God, when we can worship that which is best in us: our will to be great.” – Andrew Ryan

24- “I believe in no God, no invisible man in the sky. But there is something more powerful than each of us, a combination of our efforts, a Great Chain of industry that unites us. But it is only when we struggle in our own interest that the chain pulls society in the right direction. The chain is too powerful and too mysterious for any government to guide. Any man who tells you differently either has his hand in your pocket, or a pistol to your neck.” – Andrew Ryan

27- “Even in a book of lies sometimes you find truth. There is indeed a season for all things and now that I see you flesh-to-flesh and blood-to-blood I know I cannot raise my hand against you. But know this, you are my greatest disappointment. Does your master hear me? Atlas! You can kill me, but you will never have my city. My strength is not in steel and fire, that is what the parasites will never understand. A season for all things! A time to live and a time to die, a time to build… and a time to destroy!” ― Andrew Ryan

28- “My journey to Rapture was my second exodus. In 1919, I fled a country that had traded in despotism for insanity.”― Andrew Ryan

‘No,’ says the man in Moscow, ‘it belongs to everyone.’

I rejected those answers. Instead, I chose something different. I chose the impossible. I chose… ” ― Andrew Ryan

I hope you are enjoying your New Year’s Eve celebration; it has been a year of trials for us all.

Tonight I wish to remind each of you that Rapture is your city. It was your strength of will that brought you here, and with that strength you shall rebuild.

And so, Andrew Ryan offers you a toast.

May it be our finest year.” ― Andrew Ryan

31- “Altruism is the root of all Wickedness” — Andrew Ryan 37- “There is a world of difference between what we see and what is.” – Andrew Ryan

39- “The Seed of the Prophet will Sit the Throne, and Drown in flame the Mountains of Man”. – Andrew Ryan In life, everyone has to suffer from a lot of problems and challenges. It is up to you to solve these problems or difficulties. Whenever the character Andrew Ryan faces any challenges or mysteries, he tried to find different ways to solve them.

He said that if you want to solve any mystery or problem, then uncover it with your abilities. Or the second way is if you do not find the solution to the problem, then eliminate it from life.

By reading the quotes from Andrew Ryan, you will know about the way to solve different problems. Andrew Ryan’s quotes also tell us about the importance of freedom and victory. For getting the victory in the Civil war, Andrew Ryan uses some interesting ways.

By reading these quotes, you will start seeing the problems, challenges, and different fields in your life with different perspectives. Do you like these Andrew Rayan Quotes? If yes, then do comment, like, and share this article.