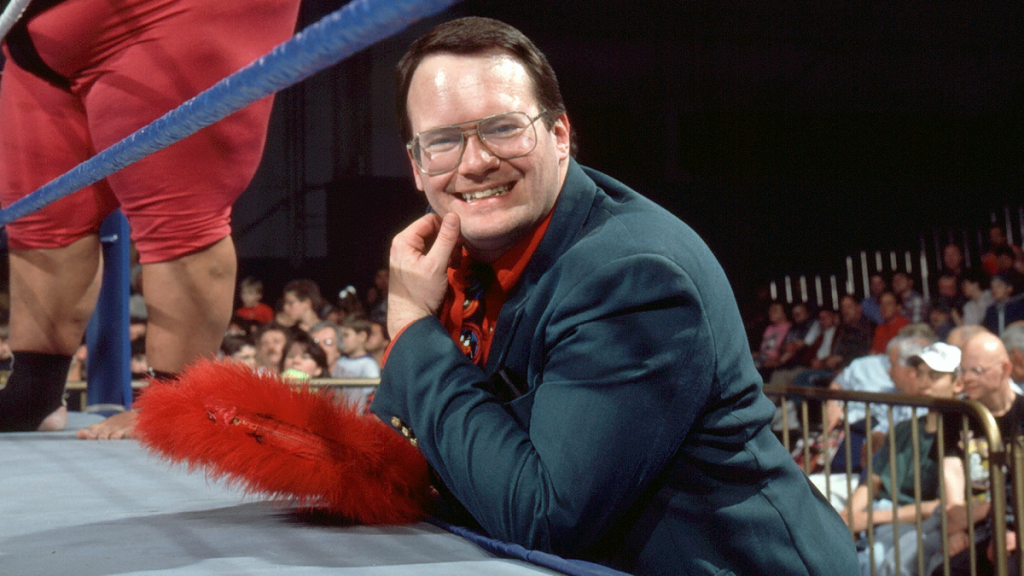 Jim Cornette Quotes – Jim Cornette is an author and podcaster from America. He also works as a professional in the wrestling industry. Jim Cornette does a lot of work in the world of wrestling. In this industry, he was an agent, manager, commentator, and booker.

Jim Cornette was also a trainer, a professional wrestler, and a promoter. He worked for different associations in the wrestling world. The name association for which Jim Cornette worked include Mid-South Wrestling, Jim Crockett Promotions, Continental Wrestling Association and World-class Championship Wrestling.

He has also worked for WWE, which is known as the World Wrestling Federation. Jim Cornette was the owner of Smoky Mountain Wrestling.  Jim Cornette inspires others with his incredible journey. We have some famous Jim Cornette Quotes that will surely inspire you.

Famous Jim Cornette Quotes That Will Inspire You 2.”Rick Steiner is so stupid, he once stayed up all night to study for a urine test.” -Jim Cornette

4.”The grass is always greener on the other side, unless Vince Russo has been there in which case the grass is most likely dead.” -Jim Cornette

5.”I like to take advantage of the simple-minded because I can.” -Jim Cornette

6.”Rick Steiner is so stupid, it takes him an hour and a half to watch 60 Minutes.” -Jim Cornette

7.”I heard last year at [insert name]’s birthday party they had to set up mirrors to make it look like a crowd.” -Jim Cornette

8.”Hulk Hogan, you may be a household word, but so is garbage, and it stinks when it gets old too.” -Jim Cornette

9.”Eventually, even a blind squirell will find an acorn.” -Jim Cornette

10.”Vince Russo destroyed the Periodic Table as he only recognises the element of surprise.” -Jim Cornette

12.”Picking out Vince Russo’s faults could be a full-time job for somebody.” -Jim Cornette

14.”He (Vince Russo) is the only booker I’ve seen who doesn’t get people over, he gets them under.” -Jim Cornette

15.”I can beat anyone, either male, female, animal, vegitable, or mineral.” -Jim Cornette

16.”Hey Tony [Schiavone], I’m glad to see you back, especially after seeing your front.” -Jim Cornette

17.”He’s so big he makes a beeping noise when he walks backwords.” -Jim Cornette

18.”Thats where he had the word “Goodyear” dermabrased off.” -Jim Cornette

19.”Johnny Valentine’s the one who said, ‘I can’t make them believe that wrestling is real, but I can make them believe I’m real.’ It would take him forever because he was just stinkingly boring for 30 minutes of the 40-minute match, but he would let people hit him as hard as they could, and he would hit people as hard as he could.”-Jim Cornette 21.”It’s said that the definition of insanity is doing the same thing over and over again and expecting a different result. In that case, the WWE ‘creative’ team must be as crazy as a rainbow trout in a car wash.

Andy Kaufman and Jerry Lawler’s match was the one thing people believed most about wrestling in the last 35 years.”-Jim Cornette

22.”Even if people that I was in love with – even if Bobby Fulton inherited a billion dollars and opened All Elite Wrestling, I was never going to be the manager of The Revival on a weekly television basis ever because that would require me being on the road on a weekly basis. “-Jim Cornette

23.” MMA and the UFC have taken all of the pro wrestling fans because it’s pro wrestling from 30 years ago, just in an Octagon and the fights happen to be real. But they’re marketed exactly the same way. “-Jim Cornette

24.” Cowboy James Storm and Eli Drake, those guys can talk and rile the people up. “-Jim Cornette

25.” I’m impressed with what the NWA has done, what Billy Corgan and Dave Lagana and those guys have done, establishing the NWA title to mean more and have more interest again.”-Jim Cornette

26.” The way that you teach wrestling is by finding good talent that you think can learn and putting them in the ring with a variety of other good talents who have experience and giving them the opportunity to pick things up.”-Jim Cornette

27.” Amateur wrestling was never considered a big box office draw because they’re really competing but they’re not getting a chance to call each other 16 kinds of names before the fight to get you interested.”-Jim Cornette

28.” They way new stars were made in WCW and WWE was by beating the established guys and getting in that mix. When you only have one established guy, that’s gonna be hard.”-Jim Cornette

29.” It’s a tossup on whether WWE is going to insult your intelligence, religion or sexual preference. It’s become a joke and a farce.”-Jim Cornette

30.” Life is too short to have anybody named McMahon in mine.”-Jim Cornette

31.” Every wrestling show is now designed to be the greatest show ever. In contrast, the NWA show is different. It didn’t tire people out to watch, something was allowed to register. It is the exact antithesis of planned, big budget, choreographed, scripted sports entertainment, and that is what makes the show so different.”-Jim Cornette

32.” I’ve been a fan of one particular guy since I first saw him in ‘Ring of Honor’ eight years ago. He was Tyler Black then, but he’s Seth Rollins now. And I think he’s just the whole package.”-Jim Cornette

33.” I met Rick Rubin through Cat Collins, a DJ friend of mine that had worked for Rubin at American Recordings.”-Jim Cornette

34.”The reason why the tag teams are not main event level attractions in the WWE is because Vince McMahon doesn’t like it and doesn’t present it that way. He’d rather make individual stars.”-Jim Cornette 37.”But wrestling used to be the same as boxing or mixed martial arts. It used to be about conflict, having a fight, who’s going to win.”-Jim Cornette

38.”A lot of people say now, ‘John Cena doesn’t work.’ Well, John Cena does the things that people go to see John Cena do, and he doesn’t take a lot of risks.”-Jim Cornette

39.” We all prosper when folks are more appraised of how great those matches were and how great those talents were from all of the guys who populated the NWA in the ’80s.”-Jim Cornette

40.”I eliminated stress by eliminating people that I don’t enjoy working with. “-Jim Cornette

41.”I was a big fan of The Revival when they were in NXT. I thought they were as good as Tully Blanchard and Arn Anderson. Jim Cornette Good Big Fan Big I went on a diet and went from 248 pounds to 211. “-Jim Cornette

42.” Maybe Rock and Elizabeth Warren could team up and shore up each other’s weaknesses. Elizabeth Warren has a plan for everything and all the experience, and The Rock could sell it to the people, ’cause the people could smell what Rock is cooking.”-Jim Cornette

43.”There’s probably as many rules of thumb to wrestling as anything in the world, and then there’s just as many exceptions to every one of those rules because somebody doesn’t fit that thumb.”-Jim Cornette

44.” The fans in Lake Charles, La., were crazy. The Freebirds would get their tires cut, so they started driving to the police station and having the police bring them to the show. The fans then cut the tires on the police car that brought The Freebirds.”-Jim Cornette

45.” When you think that in the ’50s there was wrestling and boxing – that was it. There wasn’t mixed martial arts at all; there wasn’t even karate in the United States. “-Jim Cornette

46.” We would get VHS tapes from wrestlers who wanted to come to Smoky Mountain. I got this tape from a guy called Lance Storm who I saw leaping from the top rope and cutting these great dropkicks. And the kid Chris Jericho he was with wasn’t too bad either.”-Jim Cornette

47.” One of the greatest matches I ever saw was Jerry Lawler against Terry Funk in the Memphis Midsouth Coliseum, but there was Flair vs. Steamboat in Nashville back in ’89.”-Jim Cornette

48.”Vince McMahon has the worst inferiority complex of anybody in history.”-Jim Cornette

49.” In the old days, talent owned their costumes, their intellectual property, their gimmicks. They were not employees and could wrestle anywhere they wanted to, and that just is not case in today’s WWE.”-Jim Cornette Jim Cornette is a legendary manager. He is very much famous due to his way of talking. There are a lot of quotes from Jim Cornette that will let you find your dreams.

Jim believed that everyone wants to live a life that is full of dreams and success. But for achieving success, it is very important to do hard work. Jim Cornette does a lot of work in his life.

” I loved Houston. Those fans would go ballistic.”-Jim Cornette

He is very much famous and renowned due to his hard-working journey. Jim Cornette always wanted to fulfill what he desired in life. Jim Cornette believes that he can do anything in life if he wants to.

Jim Cornette is successful because he believed in himself. By reading the quotes of Jim Cornette, you will get the inspiration to fulfill your goals. Do like and share these Jim Cornette quotes.