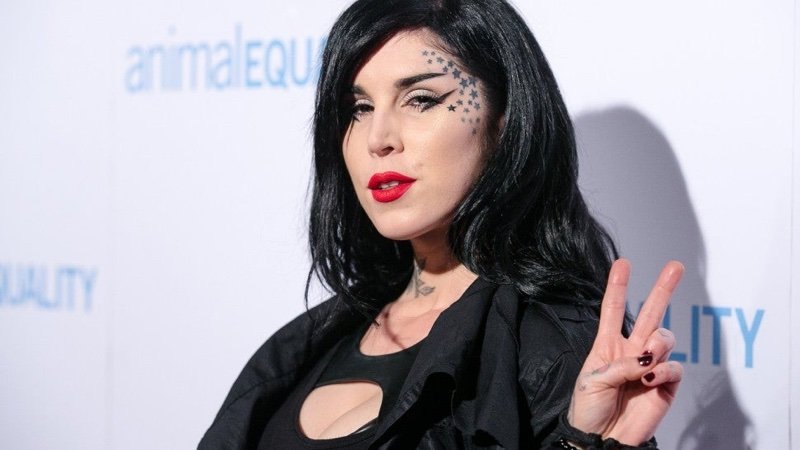 This show premiered on August 7, 2007. LA Ink was very much famous in the United States, and around four seasons of this show ran on television.

After being famous, she started her KVD Vegan Beauty. With her wonderful journey, she inspires many people. We have some famous Kat Von D quotes for you. 2.”I am a canvas of my experiences, my story is etched in lines and shading, and you can read it on my arms, my legs, my shoulders, and my stomach.” -Kat Von D

3.”Makeup is part of my daily routine. It’s the time in my mornings when I can concentrate on me, and me alone. Giving yourself the kind of attention is so important – and is something that is definitely glossed over by to many women” -Kat Von D

4.”But true individuality is more about being in tune with who you truly are, whether you’re expressing yourself physically, mentally, or spiritually; individuality arises from living without fear of what other might think or say about you and without being swayed by their opinions, leaving you free to lead life without caring about judgments made by the outside world.” -Kat Von D

5.”You know, for a long time being a heavily tattooed woman was viewed as something gross, or you’re either a criminal or a drug addict. It feels good to be a good representation of the art form versus being the token tattoo girl. I’m just glad that people even consider it to be sexy, because I think I’m just a big nerd so it works out.” -Kat Von D

6.”Like everyone else, I was born naked and screaming, waiting for my life to write itself on my skin.” -Kat Von D

7.”You have to nourish your creativity for it to flourish.” -Kat Von D

8.”Everyday, I have the choice to live a life of compassion that not only saves animals, but helps the environment.” -Kat Von D

9.”Who are your heroes? Why do you look up to them? Why do we respect those who live and think for themselves as opposed to doing what is expected? We all admire the idea of living a life unbound by thoughts of fear. People who seem to live that dream inspire us to want to do the same. They mirror the qualities that we possess but are too scared to access.” -Kat Von D

11.”There is no point in developing anything at the cost of exploiting and abusing animals.” -Kat Von D

12.”Years of cultural programming have taught us to love some animals while eating others, when in all reality, all animals are sentient beings with the capacity to feel, both physically and emotionally.” -Kat Von D

13.”Personally, I like to start my day off as a Saint and graduate to my Sinner self!” -Kat Von D

14.”Strength doesn’t necessarily come from resisting fear, weakness, or any other feeling and overcoming it. Strength comes from looking at those things straight on–and accepting them as they really are.” -Kat Von D

15.”What’s truly important–and what I find myself forgetting and having to relearn–is that right here, right now, I am free. Free to be myself and to express myself.” -Kat Von D

16.”Not only is it important for me to create a 100% cruelty-free brand, but also send out a very clear message to both consumers and companies out there: testing on animals in the name of beauty is cruel and unnecessary.” -Kat Von D

18.”Everything I’ve ever felt, but could never put into words, is poetically orchestrated through Mat Devine ‘s writing. In a lonely world, a book like this will make you feel like you belong. Simply put, Weird War One changed my life.” -Kat Von D

19.”There’s so much more work that goes into developing a makeup line than one would imagine. Personally, I like to be involved in the entire creative process – everything from art direction, collection concepts, formula testing, packaging artwork, to naming the shades and also the marketing side of things.” -Kat Von D 21.”When I became vegan I thought I would have to deprive myself of certain sweets that I loved so much, like caramel and peanut butter cups, but on the contrary!” -Kat Von D

22.”I love being completely immersed in everything I do.” -Kat Von D

23.”I’m a stickler about never going to bed with makeup on. Like, all I can hear is my pores screaming, “Nooooooo!” So I’m a saint when it comes to cleansing.” -Kat Von D

24.”I have always been a big supporter and fan of independent designers in general.” -Kat Von D

26.”People can totally tell if you adjust notes even slightly, and I know how important it is to be able to wear the exact fragrance you’re attached to. So for me, it was all about reinventing the bottle. I’ve grown so much in the last 10 years – emotionally, spiritually, and artistically – and I wanted that to show in the new design.”-Kat Von D

28.”I got to actually tattoo one of the members of The Misfits. The very first tattoo I ever did was this Misfits skull.”-Kat Von D

30.“Helping others without any expectation and without gain is just as much a gift to yourself as it is to the person you give to.”-Kat Von D

31.“Where you come from, what you look like, and what your past holds do not define you as an individual–you are what you make yourself to be.”-Kat Von D

32.“What’s truly important–and what I find myself forgetting and having to relearn–is that right here, right now, I am free. Free to be myself and to express myself.”-Kat Von D

33.“Your true self can never be found within anyone else, and it cannot be found in the hardships that life has thrust on you in the past.”-Kat Von D

34.“Who are your heroes? Why do you look up to them? Why do we respect those who live and think for themselves as opposed to doing what is expected? We all admire the idea of living a life unbound by thoughts of fear. People who seem to live that dream inspire us to want to do the same. They mirror the qualities that we possess but are too scared to access.”-Kat Von D

35.“You have to nourish your creativity for it to flourish…”-Kat Von D 38.“Regardless of the number of challenging obstacles that might stand in the way, I wasn’t afraid to risk everything for what I knew to be my calling.”-Kat Von D

39.“And that reminds me of another memorable thing Linda once said to me: “There’s so much strength in vulnerability. It’s the ultimate gift you can give yourself because you allow yourself to open up; to invite someone in.”-Kat Von D

40.“To me, the haircut represented beauty and strength, that I was a woman who would live her life without the boundaries imposed upon her by other people.”-Kat Von D

41.“If I wanted to be free of this unrequited longing, I would have to make peace with the past and finally let go. There was no way around it. But did I want to be free of it – and him?”-Kat Von D

42.”The idea of bringing color into the Super Brow collection was really inspired by seeing all our fans and followers posting colorful eyebrow pictures using our liquid lipsticks. I think that’s really cool because you know, the formula, although it’s not designed for the eye, it can work on an eyebrow.”-Kat Von D

43.”I don’t care what people think about me. When I look in the mirror, I wanna like what I see.”-Kat Von D

44.”There is no point in developing anything at the cost of exploiting and abusing animals. Not only is it important for me to create a 100% cruelty-free brand but also send out a very clear message to both consumers and companies out there: testing on animals in the name of beauty is cruel and unnecessary.”-Kat Von D

45.”For ‘Brow Struck’, I really wanted it to be able to create natural-looking brows. So we found this really innovative formula that has a very specific type of shimmer that has a reflectiveness to it. Eyebrows are not naturally matte, so the point of this formula is to really mirror that.”-Kat Von D

46.”I’ve always viewed makeup as the gateway drug to animal activism. It really doesn’t require any sacrificing or changing anything other than just replacing products that were once used to torture animals with ones that perform just as well and are cruelty-free.”-Kat Von D

47.”I tend to be attracted to darker scents. I’m not a floral girl. But I do like this old fragrance I used to wear called Versace Red Jeans. I have an eBay alert that tells me when it comes back! I think it’s more of a nostalgic association that I have with it because a boyfriend had bought it for me when I was, like, 16.”-Kat Von D

48.”I love how me deciding to not continue doing ‘LA Ink’ turns into being ‘cancelled.'”-Kat Von D

49.”The decision to make Kat Von D Beauty cruelty-free was easy and simple. Sure, my products won’t sell in China because of my decision, but if it spares an innocent animal from a life of torture, that is completely worth it in my book.”-Kat Von D

50.”I knew the minute we announced our pregnancy that we would be bombarded with unsolicited advice. Some good and some questionable – unsolicited none the less.”-Kat Von D If you are an artist, then try to express yourself through the arts. The work of every person is the way by which they express themselves. Many times our work expresses what we think in life.

“Selling a lifestyle – whether it’s a brand or an Instagram post – which teaches not just girls but people that your value is defined by what you look like is the most appalling thing that I could think of, especially as a woman.”–Kat Von D

She always expresses herself through her work. Her work is her actual thinking. It always reflects what Kat Von D believes in life. The work of every person is their canvas. Now it depends on them how they use it in life. Many people powerfully use their canvas.

Their canvas of life is full of imagination. By reading the quotes of Kat Von D, you can also find the canvas of your life. If you like these Kat Von D quotes, then do share them with your loved ones.