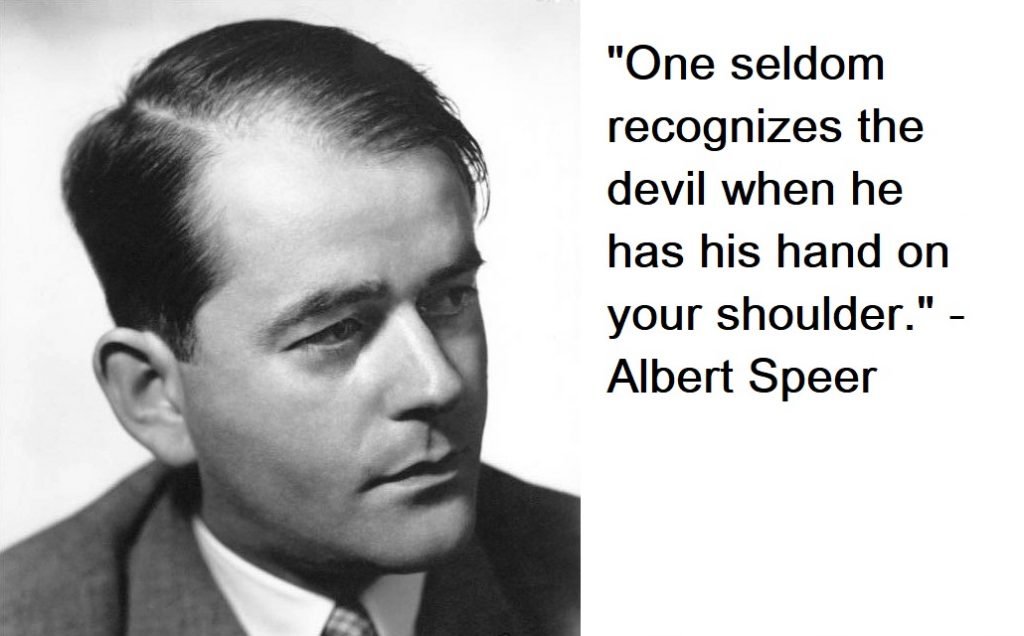 He was declared guilty at the Nuremberg trials. Albert Speer spent 20 years of his life in prison. In 1931 he became part of the Nazi Party. Albert Speer has a lot of skills in the field of architecture.

Due to these skills, he was very much prominent in his party. He also came closer to Hitler. Adolf Hitler gave instructions to Albert Speer for the construction of some structures. These structures included Nazi party rally grounds and Reich Chancellery.

In 1942 he was then appointed as the War Production and Reich Minister of Armaments. Albert Speer faced a lot in his life. For you, we have compiled some famous Albert Speer quotes. 2.”I would rather not tell you here things which every German has at heart.”-Albert Speer

3.”It is clear that a worker who has not enough food cannot achieve a good work output. I already said yesterday that every head of a plant, and I too at the top, was naturally interested in having well-fed and satisfied workers, because badly fed, dissatisfied workers make more mistakes and produce poor results.”-Albert Speer

4.”It is certain that concentration camps had a bad reputation with us.”-Albert Speer

5.”In the burning and devastated cities, we daily experienced the direct impact of war. It spurred us to do our utmost…the bombing and the hardships that resulted from them (did not) weaken the morale of the populace.”-Albert Speer

7.”In all my activities as Armament Minister I never once visited a labor camp, and cannot, therefore, give any information about them.”-Albert Speer

8.”No doubt concentration camps were a means, a menace used to keep order.”-Albert Speer

9.”Cases of sickness made up a very small percentage which in my opinion was normal. However, propaganda pamphlets dropped from aircraft were telling the workers to feign illness, and detailed instructions were given to them on how to do it.”-Albert Speer

11.”I grow dizzy when I recall that the number of manufactured tanks seems to have been more important to me than the vanished victims of racism.”-Albert Speer

12.”At headquarters, where everyone lived under the tremendous pressure of responsibility, probably nothing was more welcome than a dictate from above. That meant being freed of a decision and simultaneously being provided with an excuse for failure.”-Albert Speer

13.”Hitler had a great gift for adjusting – consciously or intuitively – to his surroundings. … With enormous histrionic intuition he could shape his behavior to changing situations.”-Albert Speer

14.”Hitler’s dictatorship was the first of an industrial estate in this age of modern technology, a dictatorship which employed to perfection the instruments of technology to dominate its own people. By means of such instruments of technology, eighty million persons could be made subject to the will of one individual. Telephone, teletype, radio, made it possible to transmit the commands of the highest levels directly to the lowest organs where they were executed uncritically”-Albert Speer

15.”The Americans had not played a very prominent part in the war of 1914-1918, he (Adolf Hitler) thought, and moreover, had not made any great sacrifices of blood. They would certainly not withstand a trial by fire, for their fighting qualities were low. In general no such thing as an American people existed as a unit; they were nothing but a mass of immigrants from many nations and many races.”-Albert Speer

16.”He was highly annoyed by the series of triumphs by the marvelous colored American runner, Jesse Owens. People whose antecedents came from the jungle were primitive, Hitler said with a shrug; their physiques were stronger than those of civilized whites and hence should be excluded from future games.”-Albert Speer

17.”One seldom recognizes the devil when he is putting his hand on your shoulder.”-Albert Speer

18.”Hitler’s dictatorship differed in one fundamental point from all its predecessors in history. It was the first dictatorship in the present period of modern technical development, a dictatorship which made complete use of all technical means for the domination of its own country. Through technical devices like the radio and the loud-speaker, eighty million people were deprived of independent thought. It was thereby possible to subject them to the will of one man.”-Albert Speer

20.”All sensible Army people turned gas warfare down as being utterly insane since, in view of your superiority in the air, it would not be long before it would bring the most terrible catastrophe upon German cities, which were completely unprotected.”-Albert Speer

Albert Speer took part in the war. After the war, he was considered as the 24 major war criminals. Albert Speer charged with the criminals of the Nazi regime. He committed a lot of crimes against humanity.

Albert Speer found guilty of these war and humanity crimes. After spending a lot of time in prison, he was released in 1966. When he was in prison, he used to write two autobiographical books.

In 1981 Speer died due to a stroke. Albert Speer was very good at her architectural work. He inspired many people with his work. Do share these quotes of Albert Speer with other people as well.