Negotiation Quotes – Negotiation is like an art that you can learn with time and experience. It can help you solve a lot of problems in your life.  In negotiation, people talk with each other to come to a particular goal or to reach an agreement.

The negotiation occurs mostly between employees, coworkers, and departments. Professionals know about the importance of negotiation. Today life is so busy that people do not want to negotiate. Negotiating is the basic necessity of our life. In our lives, many problems occur that we can solve easily by negotiation.

In business or any workplace, many issues can be solved through negotiation. Different parties sit in one place, talk with each other, and come to a particular point.

Here are some quotes that will help you to know about the importance and the power of negotiation. 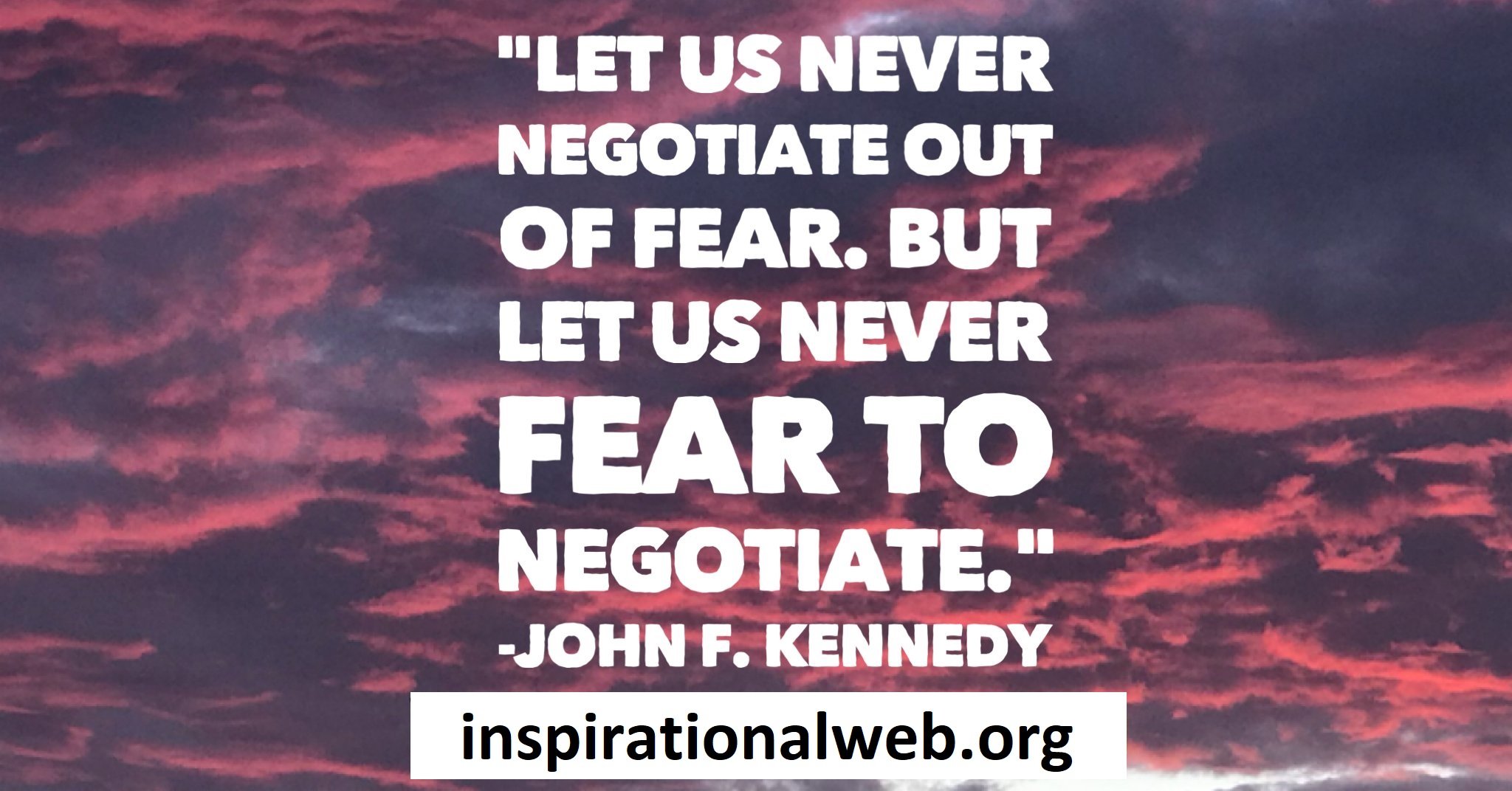 2- “Maybe if I kicked you in your soft spot, I thought. And make you sing Soprano for a week.” ― Rick Riordan

3- “Everything is a negotiation with you, Brekker. You probably bartered your way out of the womb.” ― Leigh Bardugo

4- “We’re fascinated by the words–but where we meet is in the silence behind them.” ― ram dass

5.“We cannot negotiate with people who say what’s mine is mine and what’s yours is negotiable.” – Unknown

6- “When the final result is expected to be a compromise, it is often prudent to start from an extreme position.” ― John Maynard Keynes

7- “Where two principles really do meet which cannot be reconciled with one another, then each man declares the other a fool and a heretic.” ― Ludwig Wittgenstein

8- “But the uproar this caused was nothing compared with the uproar when Katronia noticed [Rosie] had also cut her eyelashes. Various negotiations (including, finally, such desperate measures as “supposing you ever want to eat again”) eventually produced the grudging promise that, in return for Katronia keeping her hair cut short, she would leave her eyelashes alone.” ― Robin McKinley

9- “International peace negotiations need more value creation than value claiming. The more we create value for peace and development, the easier it is going to be to claim value for a nuclear weapons-free world.” – Unknown

10- “It was a monumental achievement that the serpentine tcs had once upon a time gotten the knnn to understand the concept of trade: so nowadays knnn simply contacted a station, rushed onto its methane-dock and deposited whatever they liked, grabbed whatever they wanted, and left. This was an improvement over their former behavior, in which they simply looted and left.” ― C.J. Cherryh

12- “Note to the wise: whenever someone insists that he wants to buy something from you, but tells you there’s no real value in it yet, two things are happening: he’s lying, and you’re being taken.” ― Michael A. Stackpole

14- “Think about it: if someone had found a way to manipulate human choice and free will – if someone actually had that kind of power – wouldn’t it be a tad surprising if they then decided to share their secret with the masses in a book for $20? Not to mention how it would be just very slightly unethical.” ― Chris Murray

15- “Focusing on Earning the Right will have an incredible effect on the success of every single sale call that you will make from this day on.” ― Chris Murray,

16- “To them, kindness was seen as weakness, mercy was perceived as cowardice, and negotiation was a code word for a bullet in the head.” ― Neil Walker

17- “Any negotiation has a limit. Otherwise, war is irrelevant.” ― Toba Beta

18- “A good negotiator flatters the seller, not the product.” ― Amit Kalantri

19- “Notice we said ‘It sounds like . . .’ and not ‘I hear that . . .’ That’s because the word ‘I’ gets people’s guard up. When you say ‘I,’ it says you’re more interested in yourself than the other person, and it makes you take personal responsibility for the words that follow—and the offense they might cause.” ― Chris Voss 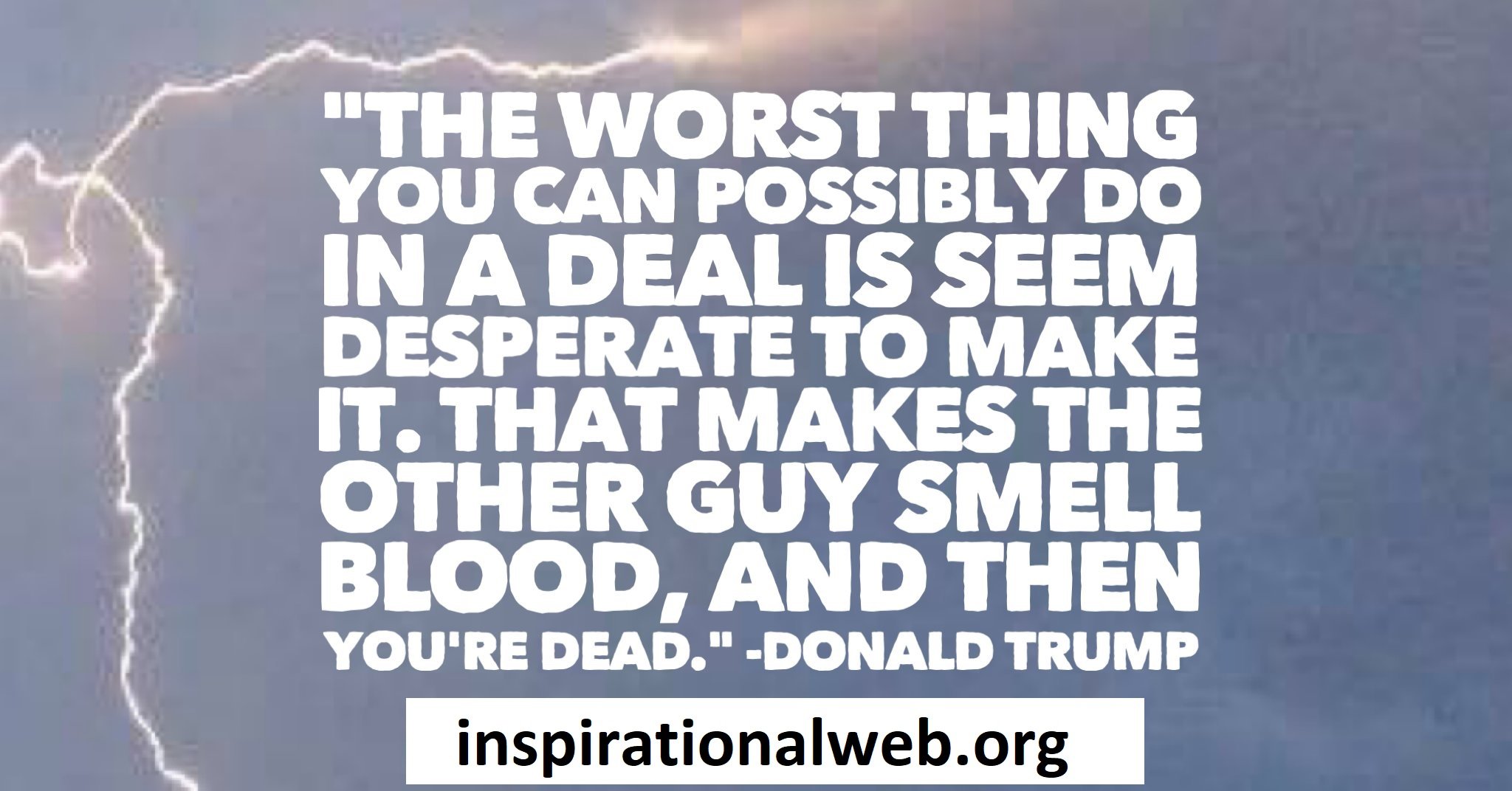 22- “When you can’t convince them with intellect, persuade them with the sentiment.” ― Amit Kalantri

23- “Only those deals get closed which you deserve.” ― Amit Kalantri

25- “A Gentleperson always negotiates. A Gentleperson understands that negotiation is the art of bartering for better things than what they’ve been given by mother nature.” ― Anas Hamshari

26- “We must be terrible negotiators to settle for reasonable dreams and unreasonable regrets.” ― Adeel Ahmed Khan

29- “Sensitivity and resolve are opposites. You need good negotiation skills to retain both.” ― Vineet Raj Kapoor

30- “During a negotiation, it would be wise not to take anything personally. If you leave personalities out of it, you will be able to see opportunities more objectively.” – Brian Koslow

32- “The most difficult thing in any negotiation, almost, is making sure that you strip it of the emotion and deal with the facts.” – Howard Baker

33- “This is a classic negotiation technique. It’s a gentle, soft indication of your disapproval and a great way to keep negotiating. Count to 10. By then, the other person usually will start talking and may very well make a higher offer.” – Bill Coleman

34- “Don’t bargain yourself down before you get to the table.” – Carol Frohlinger

35- “He who has learned to disagree without being disagreeable has discovered the most valuable secret of a diplomat.” – Robert Estabrook

36 “You must never try to make all the money that’s in a deal. Let the other fellow make some money too because if you have a reputation for always making all the money, you won’t have many deals.” – J. Paul Gett

37- “The most important trip you may take in life is meeting people halfway.” – Henry Boyle

38- “The worst thing you can say is ‘I want $X for this job,’ leaving no opening for negotiation by the other side. Better language is ‘I hope to earn between $X and $X.’ That gives the other party more flexibility.” – Bill Coleman 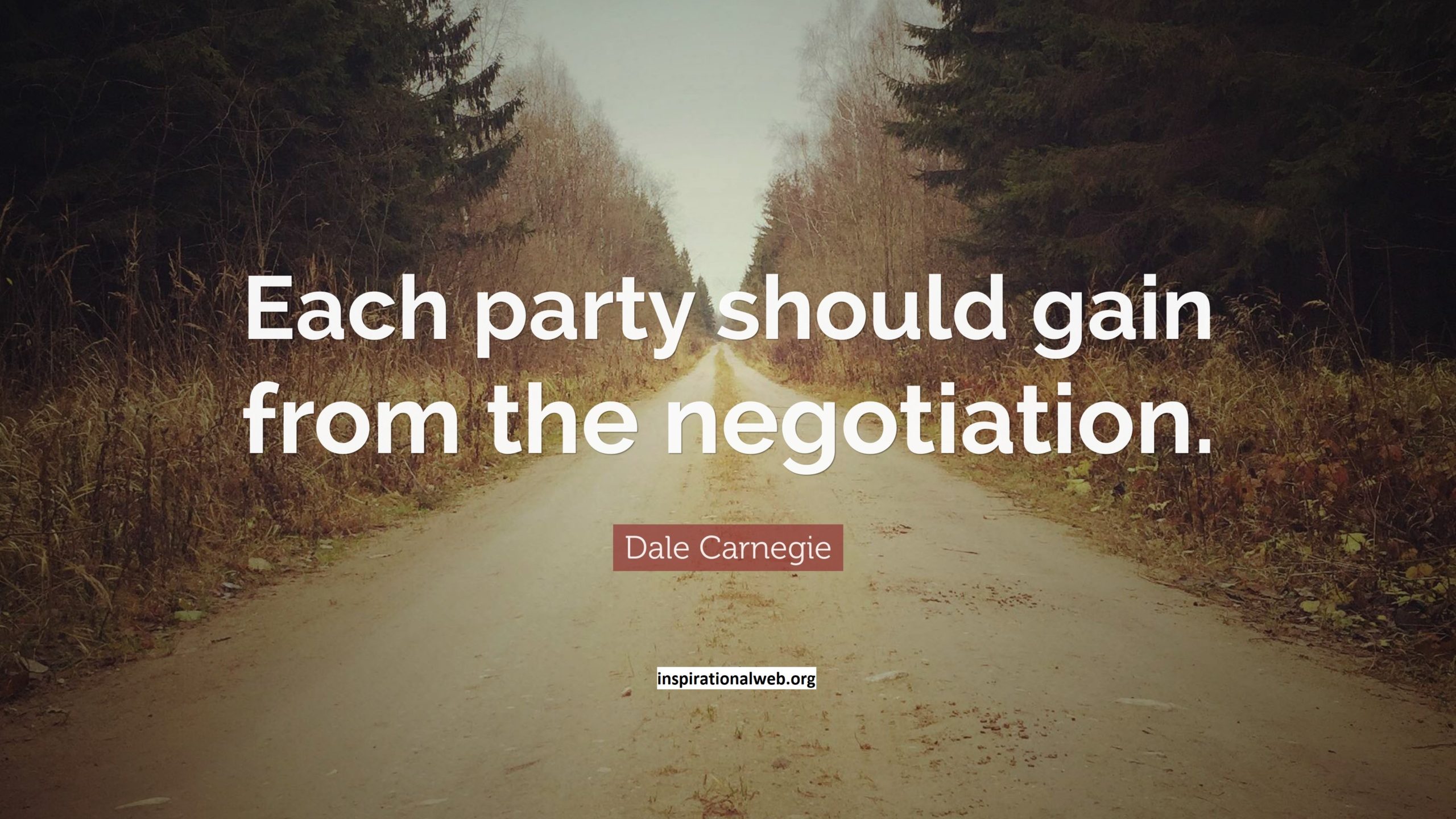 39- “If you come to a negotiation table saying you have the final truth, that you know nothing but the truth and that is final, you will get nothing.” – Harri Holkeri

40- “If you are planning on doing business with someone again, don’t be too tough in the negotiations. If you’re going to skin a cat, don’t keep it as a house cat.” – Marvin Levin

41- “Never forget the power of silence, that massively disconcerting pause which goes on and on and may last induce an opponent to babble and backtrack nervously.” – Lance Morrow

43- “A negotiator should observe Everything. You must be part Sherlock Holmes, part Sigmund Freud.” – Victor Kiam

44- “Diplomacy is the art of letting someone else have your way.” – Sir David Frost

45- “Anger can be an effective negotiating tool, but only as a calculated act, never as a reaction.” – Mark McCormack 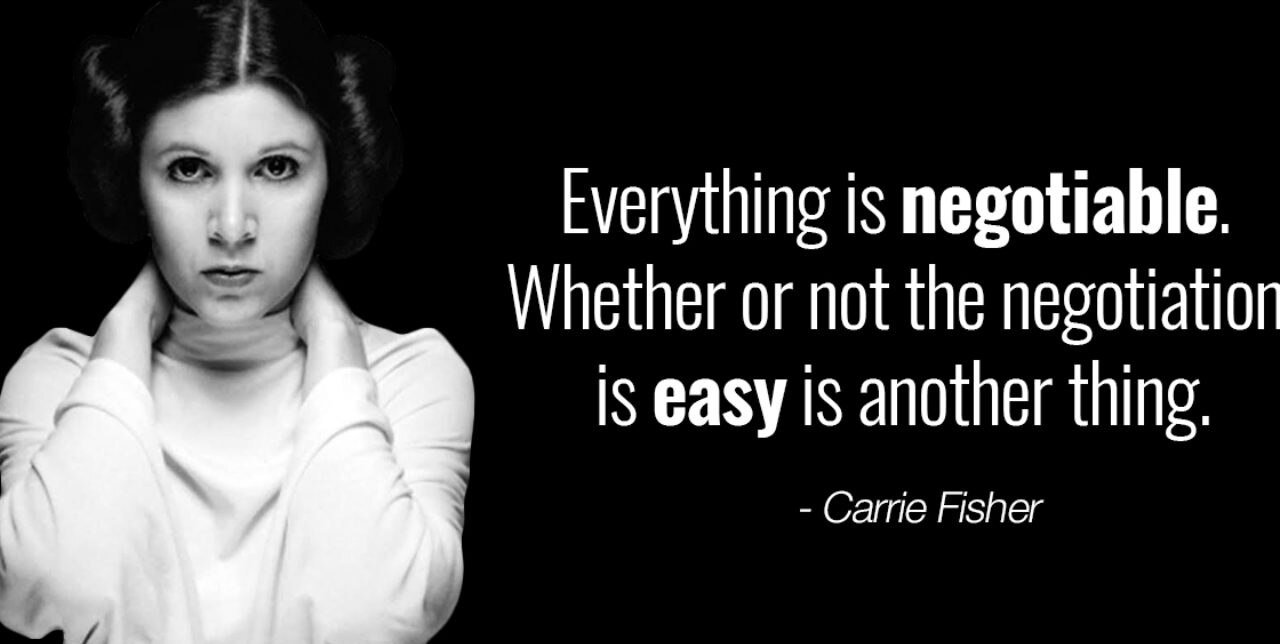 46- “It’s a well-known proposition that you know who’s going to win a negotiation; it’s he who pauses the longest.” – Robert Court

47- “Place a higher priority on discovering what a win looks like for the other person.” – Harvey Robbins

48- “Never allow a person to tell you no who doesn’t have the power to say yes.” Eleanor Roosevelt

49- “Do it now. You become more successful the moment you start moving towards a worthwhile goal.” Samuel Johnson

50- “Silence is the ultimate weapon of power.” Charles de Gaulle

52- “Nearly all men can stand adversity, but if you want to test a man’s character, give him power.” Abraham Lincoln

53. “Gabe scratched his double chin. “Maybe if you hurry with the seven-layer dip…And maybe if the kid apologizes for interrupting my poker game.” – Unknown

Negotiation is not only for business work but also very necessary in everyday life. We all suffer from many problems in our lives, for example, if someone’s child is not behaving well, at that time, they will have to negotiate with their children and listen to them with full attention.

Negotiation will help you know about the real problem and find its solution. This will help you solve the problem, encourage you to come close to your family members, and make your bond stronger.

Negotiation will also develop different qualities in you, including cooperating, communicating in a much better way, making strategies, and some other qualities. All these qualities will attract people toward yourself, and you will solve every situation of your life.